“Instead of all that commuting, why don’t you move to Virginia for a while and start that plant up?”. Thanks very much. Virginia? It’s half way up on the right hand side, much like Yorkshire.

Arriving in January for six months (which has now turned into 15) with three suitcases and a bike box, we’re plunged into minus ten conditions. Minus ten Fahrenheit. All cyclists know how much weather influences our riding so that wasn’t a great start. But Virginia is very dry, the roads are rideable even after a deep freeze and a ‘winter’ bike is unheard of. I’ve washed my only bike only once, its brake blocks remain pristine and nothing much wears out.

Those first winter Sunday rides exploring the local roads were a blast but very lonely. No one on two wheels. At all. After the variety of North Yorkshire, the local roads can seem monotonous as they gently undulate through forests. Even I am comfortable on an 11-23 block. I began to look forward to having more time(and less work) to enjoy those early summer rides. Deceptively smooth roads too, smooth enough that the very occasional pothole takes you by surprise. And so it was that all by myself on a quiet road on Easter Sunday, I managed to trash a collar bone, three ribs and a pair of Wheelers shorts. A titanium plate on my bone, lots of correspondence with the insurance company and three months later, I was at last riding confidently again but without much fitness. Since then I’ve taken in the best local routes and a few big climbs on holiday in the rarified air of Colorado.

While I was off the road, fair weather cyclists came out of hibernation. Wheelers’ kit always causes some comment along the lines of “you’re a long way from home” (meaning Cleveland, Ohio). Little do they know. We are Englanders in the site of the original 1607 English settlers so even a modest Sunday route can pass through places named by those homesick pioneers – Chester, Richmond, Isle of Wight, Scotland, Surrey . . . even Wakefield if I’m adventurous. The route certainly passes Bible Belt churches, Dukes of Hazzard style homesteads, wineries , groups of Harley-riding bikers . . . . . . .and the very occasional cyclist.

I’m slowly getting acclimatised though. Firstly you have to recalibrate what hot means. We are on the same latitude as mid-Spain and Garmin tells me that average temperatures on summer rides have topped 35°C. You train yourself to drink and to sweat. ‘The test for ‘hot’ is whether, at 32 kph on a flat road, the breeze can evaporate all sweat from your legs. Warmer than that and you have to wring out your socks. I’ve come to appreciate that “riding into a hairdryer” feeling. Secondly you quickly learn to assess road kill ahead. The occasional raccoon and possum are ok, a group of vultures usual means a smelly deer carcass, skunks need a deep breath and single “sticks” on the road sometimes signal a last minute hop over a basking snake.

Although lacking fitness, I’ve done a couple of Gran Fondos in the Blueridge and Smokey Mountains and look forward to more rides in the hills as the Fall colours emerge. Quiet, swoopy, smooth roads where the steady climbing (probably a five on the “Christon-Kirton” scale) usually amounts to 3000+ metres in what they always call a ‘century’.

The events have been pricy but slickly organized, friendly and good fun. For reasons I don’t know, overall start to finish times aren’t given. Rather they incorporate four timed sections, usually climbs, with prizes given for overall time on those. And like most sporting events here, nothing can start without the mike being handed to a smartly dressed girl while everyone puts hand on heart and listens to her singing the national anthem. I’m not sure that Great Ayton is ready for something similar at 10am on a Sunday morning.

I was here for quite a few months before finding out that the World Road Champs are in town in September 2015. The circuit is tough yet entirely urban so it’s a shame not to be able to have a blast around the same roads the pros will be using. I’m sure they will put on a great event – US is good at that.

The first few months of being here were so frantic work wise that solo weekend rides were a relief. But this winter (we’re here until next March) I’ve found a good club to ride with. Looking forward to it . . . and then to getting home and to resuming club runs! 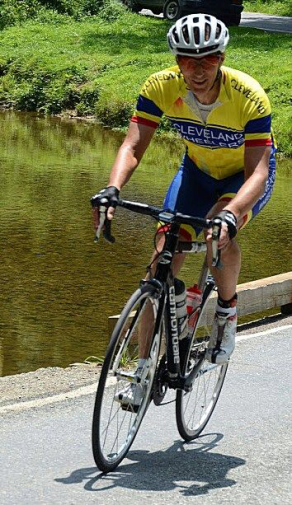 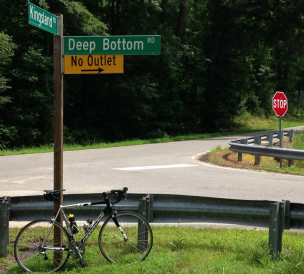 Nothing funny here…No no Not at all