This is a remote climb that you are unlikely to stumble upon by accident. You need to get to Glaisdale village and there are numerous route options open to you e.g. from Rosedale, Lealholm, Egton Bridge or you can opt for our preferred route which is to take in a route involving the Street climb. Enter Glaisdale village itself and then descend (or ascend from the Egton side) but take the turning for the church which is a right if going downhill. Then simply follow this road for about two miles along Glaisdale Side, up ahead you will see the climb up to Glaisdale High Moor as in the first photograph. When you see the sign for Rosedale take the right turn, it’s a single track road but is used by traffic as it’s the most direct road between Rosedale and Glaisdale. The climb starts almost immediately after the turning, good luck, you’re going to need it!

A map of the climb can be found here.

I don’t really know where to start with this climb, other than to say:

That said it’s not as steep or quite as hard as the Chimney (it sure runs it close though) but it is, we think, 15-25% for nearly all it’s entire length, and it’s longer than you think it will be too. Its starts in anger about 100 metres after the junction and goes up in a steep and undulating, kind of irritating way. I was constantly in and out of the saddle trying to find a rhythm but I couldn’t and just after half way when I approached the cattle grid I actually worried that I would have enough momentum to get over it, but I somehow managed to bounce over its rungs. I’ve noticed that cattle grids quite often mark the end off the serious graft, but not on this climb, a real horror and you’ll be glad when you see the junction and the top of Glaisdale High Moor. This climb was recently added to the Ryedale Rumble route and many ‘non locals’ mistook it for the Chimney, which is understandable, but imagine the psychological blow when you then enter Rosedale later on the route? What’s really unbelievable is that on the O/S map it only warrants one arrow, which implies that it has one section of around 15% and not much more. I think that they may have got this wrong!

I’ve not been down this either, and have no desire to. The surface and its steepness would make this a brakes on more or less all the way job. Not as bad as descending the Hardknott Pass in the Lakes but it would be that kind of descent I would imagine.

Dave’s Sheep Rating (out of 5)

Plenty of sheep on this climb, you’re going so slow up it that they just look at you with contempt, probably the same going down too! At the steepest point where my speed was probably lower than 5mph a sheep stood stubbornly in the middle of the road, it never seemed to get any nearer, then it just casually stepped aside when I got within about 5 feet of it. Dave said that he never saw any sheep as he was just looking at the ground in front of him to avoid having to comprehend what was ahead, ‘they were mythical beings to me on this climb’ he said, but after he’d regained his faculties he agreed with me and gave it a maximum: 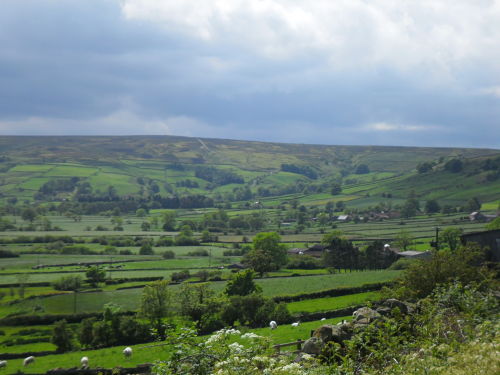 The view on the approach, you can just make out the road in the centre of the picture, it goes between the two clumps of trees, right, then left, then straight up! 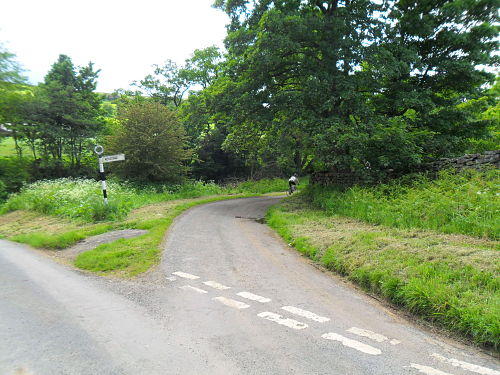 The start of the climb, the sign says Rosedale 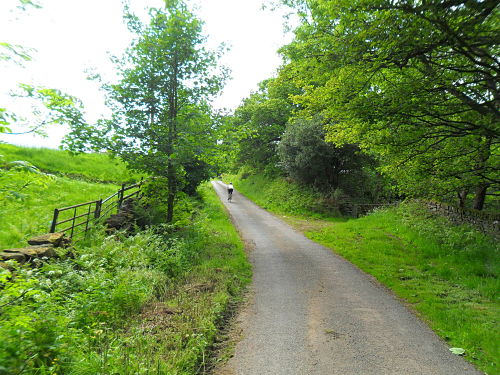 The start of the steep stuff, the surface is quite good here, after this I didn’t dare stop to take a photo as I wouldn’t have been able to get going again. 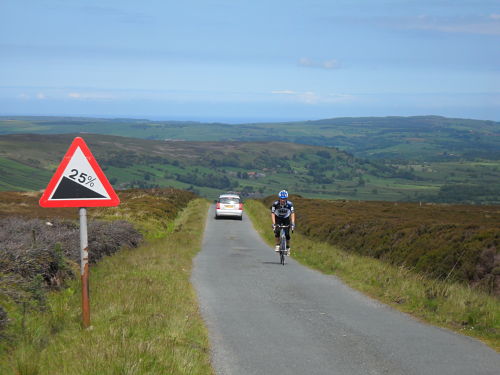 Dave approaching the summit, he held it together for the camera but soon he will collapse in a heap on the verge a broken man! In the background is Glaisdale where you’ve just come up from

Our Ratings and Comments

Paul – 9. I was struggling to articulate why this climb was so hard, fumbling as I was to blame the road surface, the undulations etc. when Dave simply said ‘what was so hard about that climb was its steepness and its length’ nuff said. Not quite as hard as the Chimney but close, in terms of pain I would say it’s the equal of Honister Pass from Buttermere in the Lakes and a bit harder than Park Rash in the Dales, if that’s of any help. It’s also harder than Blakey and Boltby Banks, which will be up next on the site.