If you live near Pickering or Kirbymoorside you have a relatively easy flat journey to Rosedale. If you live in the Teesside area you will have already travelled at least 20 miles and have climbed over to Castleton from the A171 Moor Road and then up Blakey Ridge to Rosedale Head at around 1,400 ft. From here the easiest way is to take the road on your left down into Rosedale (this is before you get to the Lion Inn). Alternatively you could go a longer route via the picturesque village of Hutton le Hole and descend the Chimney before turning back up to climb it, not recommended!

A map of the climb can be found here.

This is the one, the mythical beast that is ‘the Chimney’ or Chimley as Dave prefers to call it. Any pictures that you see of it will not do it justice but if, as Sean Kelly says, ‘you measure your effort’ and have plenty of low gears available it is within the compass of the average club rider, and I am very average indeed. The bottom part of the climb kind of ‘eases you in’ but soon it ramps up towards the first, right hand, hairpin, I chose to take it very easy up this entire section and engaged bottom gear more or less straight away as I didn’t want to risk a duff gear change on the steepest section. You are then faced almost immediately with a left hand hairpin, swing to the right hand side of the road here if traffic allows as it will smooth the gradient out a little. If you are feeling good at this point that’s great, if not oh dear! I felt okay but the next bit of the climb goes straight up like a wall and is the steepest section. Grit your teeth get out of the saddle and find what rhythm you can. In amongst the pain I managed a glimpse of the computer, 3.7 mph! If this section went on any further it would get really critical but it eases to about 15% as you get towards the old mine workings on your right and now you know you’ve conquered it. Try to enjoy the moment as you make your way up towards the warning sign at the top.

This is not a descent where you can let the brakes off. I came down this around 20 years ago after watching a tour of Britain stage in the days of Weinmann brakes (which weren’t really brakes as such, just a mild friction device which slowed you down gently on a slight slope) I nearly met my maker. The sheer steepness combined with the two hairpins make this a climb where you can’t allow any speed to build up, you have been warned! 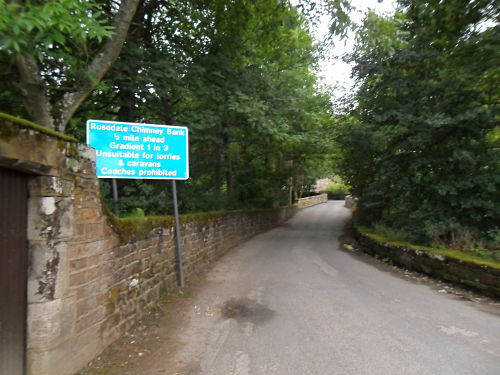 The Start, nice and gentle until you turn left round the corner, then the pain starts! 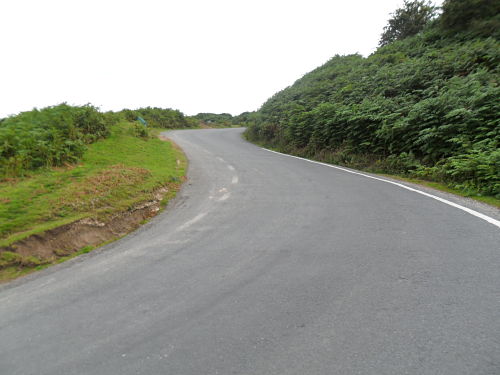 Just after the second hairpin, it’s much steeper than it looks and it hurts like heck! 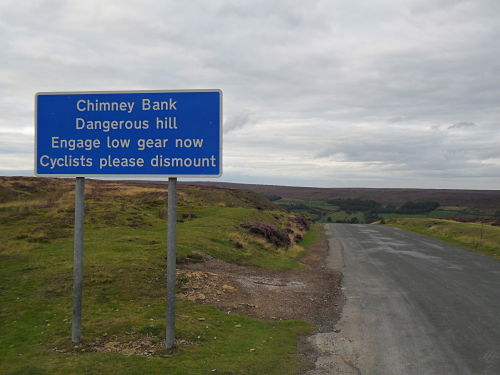 The warning sign at the top, take no notice but try not to fall off.

Our Ratings and Comments

Gradients don’t get any steeper than this and with the steepest section just after the second hairpin you need to be confident that you can get up if you do the bottom ‘easier’ section at anything other than minimum effort. Once you are past the steepest section the remaining bit seems quite flat even though it’s probably nigh on 15%. I don’t mind admitting that I used a 29 rear sprocket on this climb with a compact on the front, Rob went up in 39×23 I think, but he is a Premier Calendar rider, and even he found it hard, which is quite reassuring for us average clubmen. I’ve been up a few claimed 1 in 3 climbs but this was steeper.

Interestingly when we gathered at the top to get a photo a lad drove up alongside us in a car. He said that he’d always wanted to do this climb and then proceeded to tell us that there was a steeper climb near Glaisdale as if trying to belittle our efforts. All I can say is I know that climb and it’s not true, the climb he is talking about is Caper Hill, which is a true contender for the hardest climb on the North York Moors, but it is only 20-25% max!