Like the 5th Beatle: Stuart Sutcliffe, Pete Best or even George Best there is probably more than one 53rd climb.  I am referring to climbs that didn’t make it to the 52 local climbs that I identified for the club website, a project, or perhaps labour of love, that started in July 2010 with the climb from Kildale to Gribdale and finished with Rievaulx Bank in November 2013.

At the time I decided that one for each week of the year was about right, otherwise I may still be going!  Inevitably there were casualties, ‘tracks that didn’t make it onto the album’ if you like.  I remember agonising at the time as I approached number 50 and since I finished there are a few that maybe could have made it on there at the expense of others.  So here they are:

As the best of the bunch that never made it I thought it maybe deserves a bit of a more detailed write up. So:-

Nip up Clay Bank and descend down through Chop Gate.  About 3 or 4 miles past Chop Gate you will see a tarmac road on the right with a small cluster of houses.  If you get as far as the Fangdale Beck turn you have gone too far.  A sign says private road, ignore this, live dangerously!  After the houses the road turns right and goes through some trees, it’s a bit dark here so watch out for the speed bumps which aren’t that obvious, I think there are 3 of them.  After a couple of hundred metres you will cross a small bridge and then the first of 5 rather grim cattlegrids which marks the start of the climb.  I couldn’t work out if the first cattlegrid had a rung missing or if it was just really shoddily made, either way treat it with respect and you will get over it.

The first half mile or so is more or less dead straight through a field and steadily climbs (and goes over 2 or 3 more cattlegrids!) from about 2% up to about 10% as you near a farm on your right. 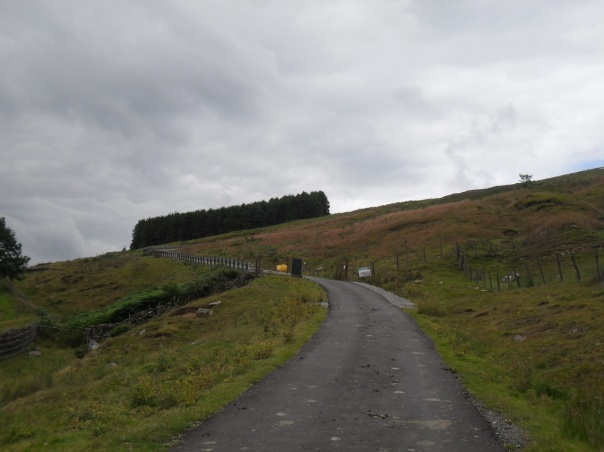 This next section is the key.  The road starts to rise sharply as it turns right and mounts another cattlegrid, there’s a sign here too reminding you that it is a private road.  You’ve come this far what the worst that can happen?  Make you way up the 15% slope to the bend and just keep grinding away.

It goes on a bit but nothing too severe.  You’ll see a small hut on your left, once you get to this the gradient eases to about 10% again and then probably down to 5 or 6 by the finish.

The panorama from the summit is truly magnificent.

Awful!  Take it easy and if it’s wet good luck over the cattlegrids.

Tough, but not a true monster, would probably have made it into the easier of the category 1’s and a 7 out of 10.

So that’s it!  There are other climbs of course but I’m pretty sure that there’s nothing lurking out there waiting to be discovered, but you never know, after all Caper Hill was little known not that many years ago.

Watch out for the new Lake District climb section which is currently being developed.