The furthest east of all the climbs on the site the easiest way to get there is to follow the Moor road towards Whitby and then take a right at the roundabout following the main road signposted Sleights and Pickering, this is about 2 miles before you get to Whitby. These are A roads though and the Moor road in particular is not great for cyclists. The best way to get there is to plan a circular clockwise ride via the coast, through Ugthorpe and then Blue Bank before returning by Grosmont or Goathland and then the Esk Valley.

A well known climb, more of a struggle for trucks perhaps than cyclists. The climb starts as you enter Sleights itself, it’s a climb of stages. After you cross the river Esk there’s an initial short 10% section then eases to only a few percent for around half a mile (similar to the bottom of Birk Brow). It then rises to around 8% for a short section just before you leave the village. Then you hit the first steep section as the road swings left then right, probably about 18%, before it eases back to about 6% as the road straightens. The next bit looks really steep but is probably about 15% and once you’re over this the work is more or less done. It does go on for quite a while after this though only at 1-2% onto exposed moor.

It’s a well surfaced A road and if Sleights wasn’t at the bottom you could easily hit 50mph+ without trying, but it is, so that’s that then!

Dave’s Sheep Rating (out of 5)

Maybe at the top, but unlikely. 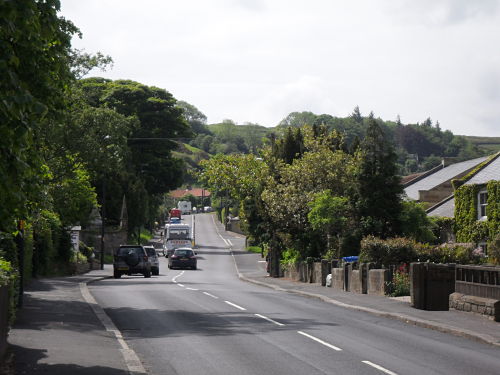 The lower slopes of the climb

Our Ratings and Comments: