I was with Ian Jones and Dave Kirton standing in a gale along a busy section of the A66 dodging HGV’s as we tried to make our way across the central reservation to the south west of Barnard Castle. ‘We’ll have to make sure we get this right on the day’ said Dave as we made a run for it over the barriers to the east bound carriageway. Fortunately we did! The wind was light too and the Big One, the 100, went remarkably smoothly as 25 riders made their way successfully round the course, and in one big group too. The two key climbs of the Stang and the newly resurfaced (in preparation for the 2014 Tour de France) Grinton climbs were successfully negotiated with regroupings at the summit of the first and in Leyburn after the second. 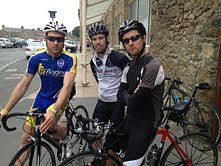 Rob Carter, Graeme Tate and Paul Christon pose for the camera outside er… a toilet in Barnard Castle!

On our recce we went wrong after Barnard Castle and in effect did a 100 out and back route. Afterwards I didn’t really fancy doing this ride but at the start of the year when we revised all the routes I made a mental commitment to do them all. And on reflection I’m glad I did as once you get past Barnard Castle and off the main road it really is a great route all the way back to Stokesley and the finish at Chapters. The climbs of The Stang and Grinton, although tough are no worse than many of those on our own North York Moors and it was good to experience a new set of stunning scenery. I had been over the Stang a few times but Grinton was a new one for me and a lot of us decided that it may actually be the place to watch the Tour, perhaps even better than at Buttertubs.

At Leyburn we descended on the supermarket and took just about all their remaining stocks of water and after that it was more or less full gas all the way back to Stokesley to be welcomed by Bryan and Margaret as always at the cafe.

Bryan and Margaret at Chapters at the end of the ride

We know it’s not a race but the group exploded at the twin attack points of Hutton Rudby dip and Skutterskelfe bank leaving Tate to cross the line first, followed by Christon, Danks and Kirton – we were just ‘tapping out the rhythm’ and not sprinting Bryan honestly! Well at least in my case as I can’t sprint much anyway!